You may eat a healthy bento lunch, but what when you get hungry in-between meals? You could eat some fruit or something, but you may want something a bit more substantial yet easy to transport without succumbing to the lure of Krispy Kreme donuts or a bag of potato chips. These not-sweet cookies are one option.

These dense, shortbread like cookies are not sweet - they are indeed a bit salty, from the gomashio (sesame salt). They are very filling 'in-between' snacks, clocking in at around 80 calories each. They are sort of homemade, not-sweet versions of Calorie Mate Block (see Notes) - they're just as filling with none of the artificial vitamins or sugar, and are loaded with the goodness of sesame. If you like sesame, you will love these.

I've made them in three variations. One is made with white flour and butter, and is arguably the tastiest but least nutritious. The second is made with whole wheat flour, olive oil and sesame oil, and rivals the white flour one in taste - but is a bit crumbly. The third is a gluten-free, vegan version that uses chickpea (gram) flour, tahini and sesame oil. It is quite firm and tasty, and definitely the most nutritious, but may not be to everyone's liking.

This is adapted from a Japanese cookbook called クッキーがいっぱい！ (Kukkee ga ippai - Lots of Cookies). In the book it's represented as a 'healthy cookie'. It's not that healthy, but the gomashio does save it from being totally nutrionally deficient. And, at least according to the local taste testers, it is the best tasting one of the three.

The procedure for making all of the cookies is the same.

Cream the butter (putting it in a plastic bag or plastic wrap and smooshing it around in your hands is the easiest way). Add the sesame seeds and mix in well.

Add the flour, and rub in well until the mixture is crumbly. Add the milk little by little until you get a ball of dough that just about holds together.

Put the dough onto a sheet of plastic wrap, and form into a block. Wrap the plastic film around the block, and straighten out the sides of the block so it's a neat rectangle. It should look like this (this is actually a block of Variation no. 3, but you get the idea): 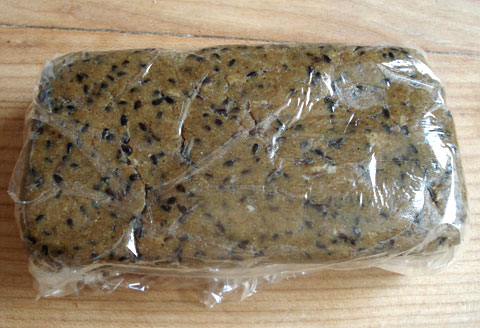 Put in the refrigerator for at least 30 minutes until firm.

Heat up the oven to 180°C / 360°F. Line a baking sheet with kitchen parchment paper or a non-stick silicon sheet.

Slice the dough block into 12 equal slices. Bake for 15-20 minutes until firm and lightly browned.

Variation: Add 2 Tbs. of grated cheese to the dough.

Gomashio cookie version 2: Whole wheat and sesame oil (vegan if you use soymilk)

Makes 12 cookies, about 85 calories each. This version came in a close second in taste tests.

The procedure is the same as for the flour and butter version, except that there is no need to cream the oil of course. You may need a bit more milk or soymilk to bind the dough.

Makes 12 cookies, about 85 calories each. This version was pronounced 'interesting and curiously addictive' by taste testers.

Again, the procedure is the same as for the other versions. This one needs more liquid (soymilk) than the others - just keep adding lin little dribbles until the dough holds together. You may want to add a couple of tablespoons of sugar to this one, since the tahini can be a bit bitter.

These cookies can be crumbly, so carry them in a small bento box. They keep for a couple of weeks in an airtight container, so you could even stash them in a locker.

Calorie Mate Block is a Japanese meal replacement bar, that looks and tastes like a small block of shortbread. When I was in high school, I used to eat Calorie Mate Block as an emergency snack quite a bit. They come in individually sealed foil packs, and are 'only' 100 calories each. They are small and handy to carry around, and really hit the spot when I was up late studying for exams. (It's the fate of Japanese students to study long, long hours for exams.)

A few weeks ago, I spotted some Calorie Mate Block at our local Japanese grocery store, and bought it in a fit of nostalgia. I don't know...it doesn't taste nearly as good as I remember. But, it is just as filling.

Here's Kiefer Sutherland as Jack Bauer from 24, in a commercial for Calorie Mate.

If you're curious about how Calorie Mate Block tastes, and can't get it locally, you can buy it from J-List. There are also Gel and canned drink versions of Calorie Mate...but we won't go there.