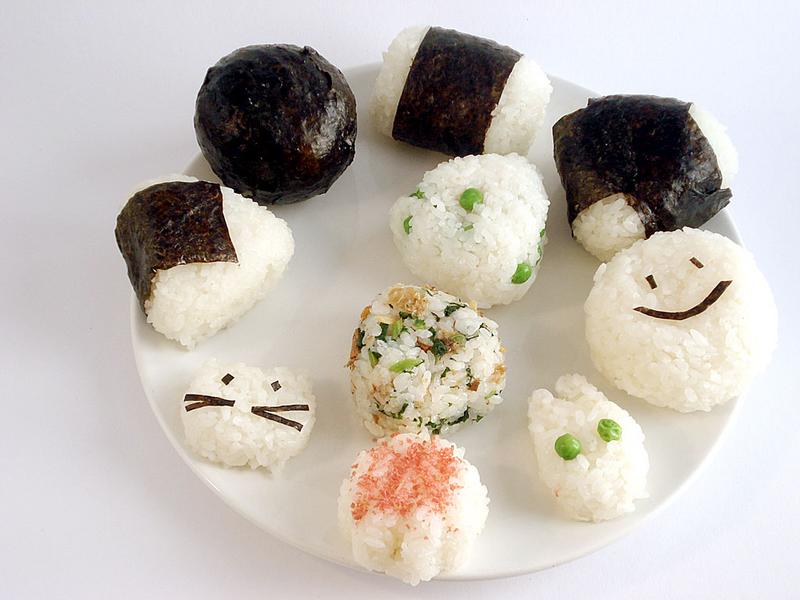 Onigiri (or omusubi, the other name for the same thing), the cute little rice ball, has really become popular outside of Japan in the last few years, in large part it seems due to its iconic status in anime and manga. While the onigiri is not limited in Japanese food culture to just bento use, it's an indispensable part of the bento maker's repertoire.

Previously on Just Hungry, I've explained how to make onigiri twice: the traditional, hot salty palms way, and an easier method using plastic wrap and a cup. And you can always use a plastic onigiri mold if neither method appeals. However, I have never really gone into depth about the different shapes and kinds of onigiri. So, here it is - a parade of different kinds of onigiri: shapes, coverings, fillings, and more.

But first to dispell some onigiri myths...

The one rule of onigiri is...

Onigiri must be made with sticky, short- or medium-grain rice, ideally steam-cooked japonica type rice. If you can't get a hold of Japanese rice (also commonly sold as 'susi rice'), Italian medium-grain rices uses for risotto like vialone (which is the most like Japanese urichi-mai), arborio and so on can be used. Long grain type rice just will not stick together sufficiently. See the Looking at Rice article for an in-depth explanation of different types of rice, and what can and cannot be used successfully for onigiri.

(Note that I've used white rice for illustration purposes for this article, but properly cooked brown rice can be used in most cases too.)

The keys to great tasting onigiri are

As stated above, an onigiri does not have to be triangular. As long as it holds together, it can be any shape possible.

Above are the the traditional hand-formed onigiri shapes: triangle, flattened round, and cylinder or tawara. Tawara is the shape of the traditional straw bale that was for storing and transporting rice. 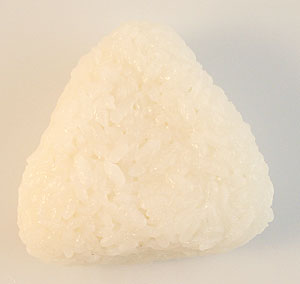 This is a plain ball of rice, lightly salted on the outside. There is no filling, nor any cover. If one has excellent quality rice, such as top class shinmai (new rice from the current harvest) and wants to savor the pure flavor of the rice, this is the one to have.

A plain onigiri like this is the essence of Japanese food to me: rice, and salt. Rice was so important that the wealth of lords used to be measured in how much rice their lands produced, and salt is used extensively in Shinto rituals even now, to purify and sanctify. The onigiri as religious icon? Why not? 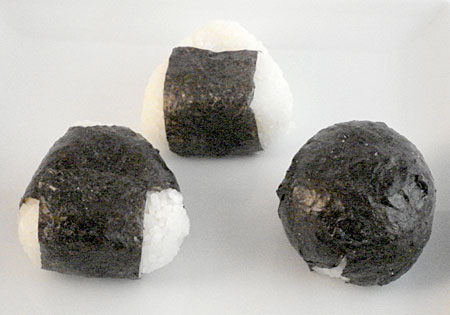 This is the most popular kind of onigiri, with a small amount of salty filling in the inside covered with plain rice, which is covered partly or fully with nori. Depending on if you like your nori crispy or a bit soft and moist, you either carry the nori separately and wrap it around the rice when eating, or put it on the rice when making (and when the rice is still warm). Since it's like thin paper, it can be cut easily with scissors, and is used quite a lot for decorative 'cute' bento. 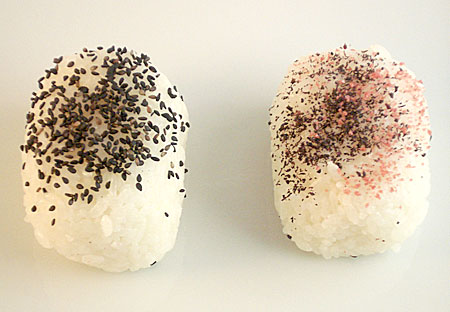 This is a filled or unfilled onigiri that is sprinkled on the outside with something. Sesame seeds, gomashio (sesame seeds mixed with salt), or furikake (mixed savory sprinkles - there are many various flavors) are commonly used. The one on the left is sprinkled with gomashio, and the one on the right with two colors of yukari (dried shiso leaf powder). 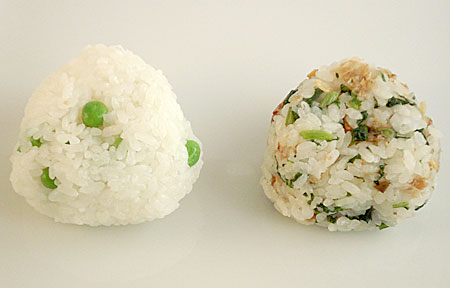 For this type of onigiri, the rice is first mixed with something, then formed into a ball. The example above on the left is mixed with green peas, and the one on the right is mixed with homemade furikake made from radish leaves and bonito flakes (recipe ). Since the rice is flavored, this type usually doesn't have a filling, and is often not covered to show the rice off (or just has a minimal nori strip). Anything can be mixed into the rice like this as long as it's not too moist or oily, which will make the rice grains fall apart. 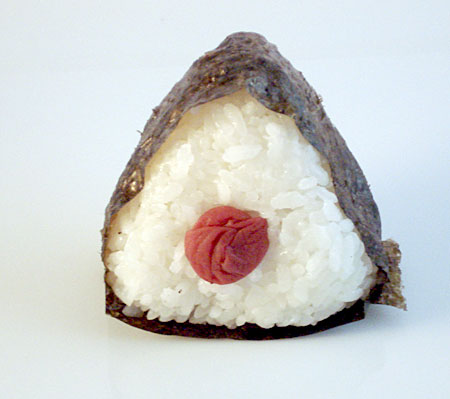 This type of onigiri shows off the inside and is only wrapped around the sides, rather than all around the ball. This one is rather more difficult to make than other types. 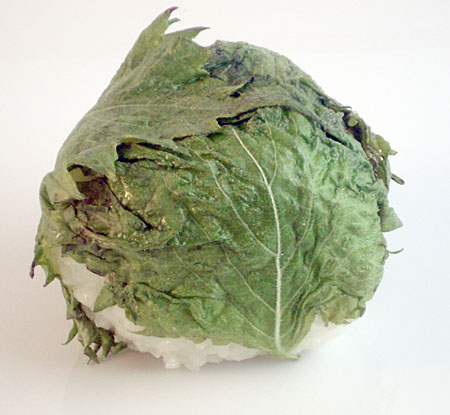 Nori is the most common onigiri wrapping, but there are other wrappings. Here is one wrapped in salted green shiso leaves.

Other wrappings include nozawana zuke (pickled green leaves) and hakusai zuke (pickled nappa cabbage), thin dried kombu seaweed called tororo, and so on. I've even seen salted lettuce leaves and kimchee used as wrappers. Onigiri wrapped with alternate wrappers can be filled or unfilled, depending on how salty the wrapping is. 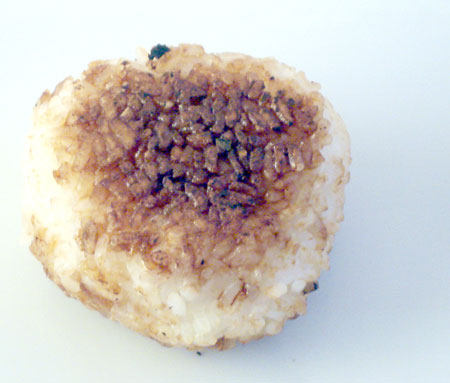 Onigiri that is grilled on a wire grill until crispy, then brushed with soy sauce or miso. Yaki onigiri are best served hot, though they can be chewy yet tasty bento additions. Yaki onigiri usually do not have fillings, though some people like to put a little umeboshi or okaka inside (see the Filling section below).

What goes inside the onigiri 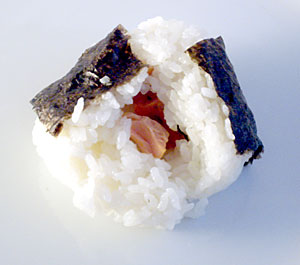 In response to my previous onigiri posts on Just Hungry, the question asked the most is about fillings. I have already written about this before, but it bears repeating here. Basically, anything that fits with rice and is not too greasy or watery can be used as filling. So, if the traditional fillings don't appeal to you, try things that you like and see how they taste!

If you are a traditionalist as I tend to be, here are the most popular fillings. 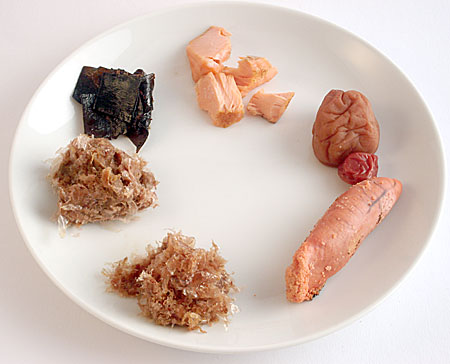 From the top, clockwise:

Rather less traditional but widely popular: 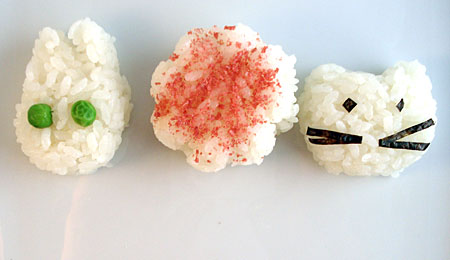 If you use molds you can make other shapes too, such as these above. Why not a bunny or cat onigiri? Personally I don't use molds much since I can make them by hand a lot faster, but they can be fun if you have the time, or are making them for a party or something like that. (I actually used egg molds to make the ones in the photo.) Faces can be made with cut nori or anything you can imagine. It should all be edible though! 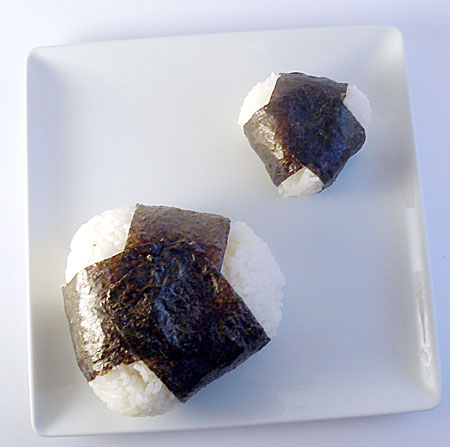 You can also play around with the size of the onigiri. Here's a 'jumbo onigiri' side by side with a regular sized onigiri. The Jumbo has three kinds of fillings inside,has about 2 1/2 cups of rice, and comes in at around 600 calories. It's a two-fisted onigiri!

Eater beware, or the calories in onigiri

A small to average sized onigiri has around 1/3 to 1/2 cup of rice, which is 80-110 calories. Depending on how big you make them they could be even more. If you are doing portion control, it's best to pre-measure the amount of rice as in this method.

Onigiri can be frozen, well wrapped and filled (except for tempura and chicken karaage type fried fillings, which can get soggy or tough if you microwave them later). I would not make onigiri with frozen rice however - it's best to form the onigiri an then freeze it. You can then de-frost them, still wrapped, at room temperature, in the fridge or gently defrosted in the microwave. See also: Keeping onigiri fresh and more.

Combined with the previous onigiri articles linked to here, I hope that this answers most, if not all, of the onigiri questions you may have. (Except for the famous Hawaiian Spam Musubi. I still haven't tried it. Anyone want to invite me to Hawaii? ^_^) (Since this article was originally posted, I've been to Hawaii, and tried spam musubi several times. I found them edible but do not love them. Sorry, spam musubi fans!)

[Edit:] This post is Bento Of the Week on Yum Sugar. Thanks to Team Sugar!

Before asking a general question about onigiri, please check out the Onigiri FAQ page. Chances are your answer is already there!

Type:
basics
Filed under:
terminologyriceonigiribento culture
‹ Making onigiri with a plastic bag up Quick onigiri tip: Show what's inside on the outside ›