Some bento-related news that caught my eye recently:

Married guys and single women take homemade bentos to work as a matter of course, but up until now single guys have relied on bought bento from convenience stores (conbini) and so on. But now it seems that more single guys are bringing homemade bentos too. Sales of utilitarian bento boxes, even 'Tupper' (=Tupperware) are on the rise. Reasons given by these "Bento Boys" as they are dubbed include the worsening economy/to save money, health concerns and for ecological reasons (combini bentos come in landfill-cluttering plastic or styrofoam disposable containers). According to this Japanese article, the hip Single Guy these days saves money where he can, but doesn't stint on splurging on his hobbies and interests. Presumably these single guys make their own bento (the article says that many rely on readymade bento components that are sold by weight at conbini and supermarkets, and cook their own rice. Rather like buying deli meats and assembling your own sandwich I guess.) (Via the always interesting Mari Diary). You could follow their example and become a hip, intelligently economizing Bento Boy or Girl too!

Speaking of combini, in recent years some combini chains have come out with 'deluxe' onigiri retailing for 200-300 yen each, filled with expensive things like ikura (salmon caviar), tender beef filet, and uni (sea urchin), as well as makunouchi-style expensive bento lunches. Now the trend may be reserving: the Lotteria chain is coming out with small deep fried chicken rice onigiri (more like rice croquettes) that retail for 100 yen called "Koro Musubi". This adds to their lineup of 100 yen small bite offerings, which include the "Straight Burger Lotteria" (a heterosexual burger for homophobes...I'm kidding, I think they mean it's a no-frills burger), "Snack Chicken" and "Vegetable Life 100". Japanese link. Also, people are turning away from the deluxe bentos to more economic versions; a department store in Kagoshima is having success with a line of 260 yen bentos (Japanese link.) The 'in' bento is the classic noriben - see my noriben recipe.

You may know Juri Ueno (上野樹里）as the star of the live-action version of the popular anime and manga Nodame Cantabile. She is going to be in a commercial for Food Action Nippon, a campaign sponsored by the Japanese Ministry of Agriculture, Forestry and Fisheries (農林水産省, MAFF) that encourages eating local and promoting domestic food production (i.e. 'food self-reliance'). Here she is being interviewed, with a part of her commercial, where she shows her love of onigiri. (Yep I know, so kawaii. She's 22, for what it's worth.)

And last but not least: Hormel Foods, makers of the infamous Spam, announced that they are re-commencing a fullblown Spam assault on the mainland Japan market in 2009 (Japanese article). Spam as you probably know already is very popular in Hawai'i, especially as spam musubi. Since musubi (onigiri) originated in Japan, many people erroenously believe that Spam is also popular in Japan. Not so: it is indeed popular in Okinawa, where it was introduced to the local population by the American military (as it was in Korea), but so far Spam is only available as 'imported food' in some department stores and such. Here's how the Japanese version of Spam will look (this actually says 'with 20% less salt compared to Classic'): 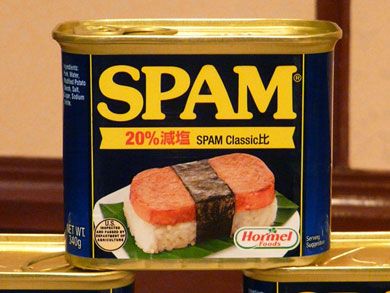 This is my last Just Bento post until after Christmas. Happy Holidays to you all! (And yep I'm still working out the details on the January Bento Challenge. Stay tuned for more details after the 26th!)