The Bento&co Contest winners are announced, plus some personal favorites 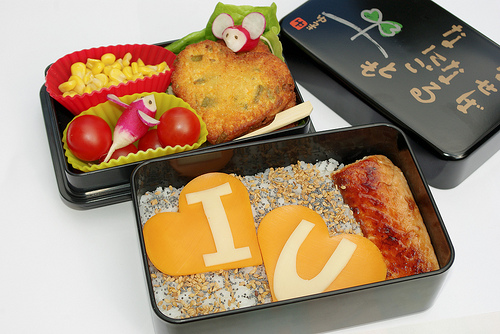 The results of the big Bento&co Contest have been announced - the grand prize winner is Huang, who gets to go to Kyoto in September! As I mentioned earlier, I was one of the judges for this contest, and it was a very difficult task indeed to come up with a top 50, let alone a top 20. Everyone was really pushing the envelope!

Here are some of my personal favorites that didn't make the finalist list (with one exception).

Keep reading The Bento&co Contest winners are announced, plus some personal favorites →

Salameshi, a TV program about working peoples' lunches on NHK A review of a fun program on NHK, the Japanese national broadcaster, about the lunches regular Japanese working people eat.

Bored with ham? Get ideas from a decorative ham salad contest in Japan Who knew that you could get so creative with humble ham slices?

Keep reading Bored with ham? Get ideas from a decorative ham salad contest in Japan → What is a bento anyway, redux: It's not just about cute charaben (Note: This is in part a belated response to the New York Times blog post about bento boxes that appeared in September. I had started it some weeks ago but didn't have the time to finish, until now. Please also read the very thoughtful forum discussion about the post.)

The New York Times blog post about Beauty and the Bento Box was, after the recent balanced article about bento boxes that appeared in the same publication, was rather disappointing. To see yet another piece in the mainstream media focusing just on the aesthetics of bentos, and specifically on charaben, gives me a "What, again?" sort of resigned feeling. The question that they posed to a group of experts (only one of whom is Japanese...I wonder how many have even had a homemade bento for lunch?) was a leading question if there ever was one: "What does the care devoted to the visual details in a packed lunch suggest about the culture? Why is such value placed on aesthetics in everyday life in Japan?".

I've repeated this many times on this site already, but the basic definition of a bento box is "a meal in a box", as the subtitle of this site says. Bentos can be for any meal. They can be made by and for anyone. They are often portable, but not always (as for bento box lunches served at sit-down restaurants). In short, bentos are just part of everyday life for most Japanese people. Charaben are just one category of bentos.

Keep reading What is a bento anyway, redux: It's not just about cute charaben →

There is an article about bento lunches in the Wednesday, September 9th edition of the New York Times, titled What's for Lunch? Enter the Bento Box, a Touch of Japan, by Samantha Storey. I'm quoted there several times; also quoted are my fellow bento bloggers Pikko of Adventures in Bento, Biggie of Lunch in a Box, and many others - including quite a few Just Bento readers! (It's up to you to match up the real name with the online presence :)) It's one of the best mainstream media articles (in Engish) that I've seen so far - not just focusing on over-the-top kyaraben, or bentos for little kids, as many seem to do. (Samantha also blogs about her own bento-ing efforts.)

If you've found your way to Just Bento via the NY Times article, welcome! If you are new to bentos, you might want to start with the Bento Basics section. Bento friendly recipes of all types, not just traditional Japanese (though there are plenty of those too) can be found on the sortable recipes list. If you want to look at complete bento examples with step-by-step instructions and timelines, take a look at the bento lists. Want a way to ease into the bento habit? Try the Get Started Handbook, or follow the Get Started Bento Challenge program. You'll find a lot more useful links on the left of this page. Last but not least, you may want to join our community of bento enthusiasts by <a href=http://justbento.com/forum">joining our great forum, or our flickr pool.

Welcome to the wonderful world of bentos! お弁当の世界へようこそ！

About the recent SIGG bottle brouhaha, and - what do you drink with your bento, and in what?

In Japan, there are numerous bento contests, especially targeted at practioners of the art of charaben or kyaraben, cute character bentos. The biggest one of them all is arguably the annual charaben contest held by Sanrio, now in its 3rd year. The one rule of the Sanrio contest, not surprisingly, is that the bento entries must feature Sanrio characters.

The winners of the contest were announced yesterday. Here's the Golden Grand Prix winning bento :

Like the winning bento last year, it's a picnic bento, titled "It's spring! Picnic bento for everyone", and the Golden Kyarabeniste is a Ms. Harumi Sugiyama from Saitama prefecture. The bento has the following mind-boggling components: